In 2018, we spoke to the Fintech Times about what was to come in 2019. We predicted that as the effects of open banking and PSD2 developed, we would see the Payment Initiation Services Provider (PISP) functionality become a more mainstream alternative to the checkout experience. We also predicted that regulation would be viewed by more businesses as an enabler to innovation as opposed to a restriction from it. Finally, we foresaw that there would be a greater appreciation for the need for smooth crypto-to-fiat (and vice versa) interoperability, bringing blockchain tech further into mainstream culture and making it more accessible to businesses and consumers alike.

Last year, we came to the end of another technologically-driven decade, seeing payments regulation intensify and widen (with 5AMLD set to affect cryptocurrencies for the first time), financial innovation continue to develop and rapid growth in the blockchain space. We also saw banks increasingly partnering with FinTechs to offer more innovative capabilities, the rise of biometric technology to secure our transactions and a plethora of flexible ways to pay.

Here are the top five trends that we saw emerge across the FinTech, platform and crypto industries:

1. The above and beyond marketplace

Over the last decade, the platform business model exploded in popularity with startups being launched every day around the world. But owing to the short life span of many startups, a new trend emerged: growth at all costs was no longer the be-all and end-all. Many marketplaces focused on growing efficiently and going above and beyond to reduce the risk of early disintermediation. Rather than focusing purely on bringing new users to a platform, many businesses encouraged existing buyers and sellers to migrate their relationships online, therefore securing a wider range of users to their platform.

2. Libra and the push for crypto regulation

The buzzword of last year. Libra divided the opinions of the financial community and regulators alike. Facebook’s proposed cryptocurrency, Libra, was to launch in 2020, but the project was described as a risk to financial stability, financial crime and “a threat to sovereign currencies”. Libra did however open the conversation for regulation in the cryptocurrency space. 5AMLD - the 5th Anti-money Laundering Directive - which was already set to include cryptocurrencies in its legislation, came into force in January 2020 and we believe that it is the first of many significant steps forward in the legislative treatment of digital currencies.

3. The rise in popularity of Progressive Web Apps

Despite not being strictly new, Progressive Web Apps are the new standard for building a web application. They are the evolution of traditional web pages into immersive apps which provides a first-class user experience. The key features of a PWA are:

4. The prominence of network effects

Network effects work on the basic principle that the more people join a network, the stronger the network becomes - think of the way a business like Monzo is able to build value. The more people that use Monzo, the wider their network and the more valuable their features (such as P2P payments) become. With the likes of platform giants like Uber, Amazon Marketplace, Airbnb and more, the power of building a strong community became even more apparent. Network effects allow businesses to extend their reach significantly - and Facebook’s announcement of Libra brought the monopolising potential of network effects even further to the forefront of attention.

5. Strong UX and the tribal consumer

As the trend of hyper-personalisation grew across the FinTech industry with both challenger banks and financial products honing in on the technology, consumers began to form loyal communities in support of them. “Tribes arise when consumers identify as a group based more on common collective behaviors than on demographics.” Monzo, Starling, N26 and Klarna were just a few examples of businesses that attracted tribes of users. And they did this by putting seamless UX at the forefront of their offering, making it easier than ever for their users to pay, receive payment and navigate around their products. 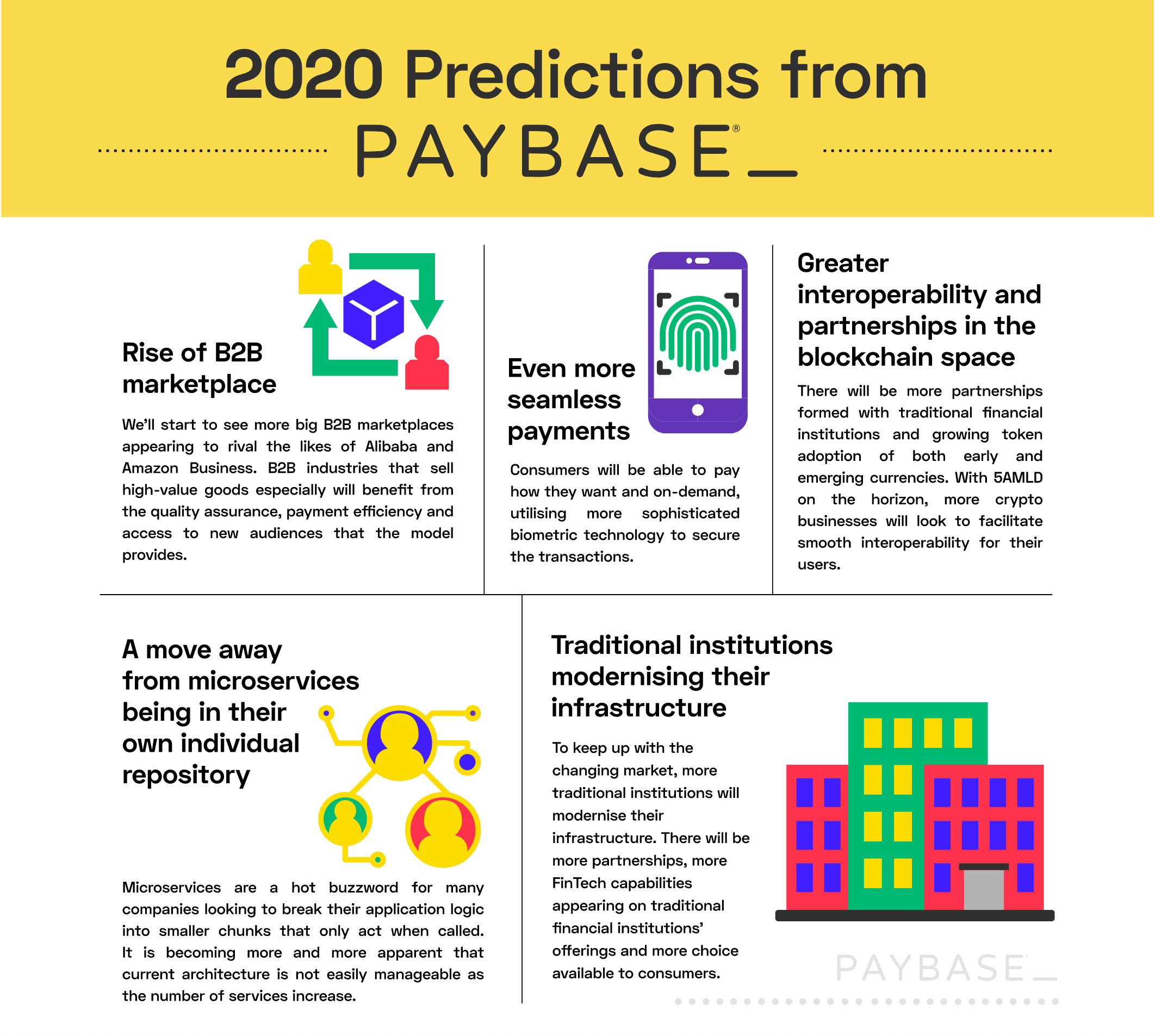 Changes in regulation, the rise of cryptocurrencies, Brexit - 2018 is certainly going to be a year that throws up both challenges and possibilities for the world of FinTech. At Paybase we’re very excited about the year ahead, and after speaking to ...

On Sunday 8th March, we’ll be celebrating International Women’s Day, a day that celebrates women’s (aplenty) achievements, raises awareness about gender inequality and encourages us to take action against bias. So of course, at Paybase, it’s somethin...

Read moreRead more
Coins and tokens - can you spot the difference?

Although the terms are often used interchangeably, crypto coins and crypto tokens are in fact not the same. Both are decentralised and based on blockchain technology, but coins and tokens have different functions. They, therefore, reside in different...

Speak with one of our team to understand how we can help develop a better payment solution just for you.

Stay in the loop_

Subscribe to our mailing list to receive our popular monthly newsletter, hear the latest news from our Founders Workshop and a collection of articles, news and product updates directly into your inbox.

Why choose usWhat we offerHow we do it

Who is it for?

About us
Get in touchLogin

Paybase Limited is authorised by the Financial Conduct Authority under the Electronic Money Regulations 2011 (FRN: EMD/900524/SF)